I have been fishing the same pits for two years now in search of that elusive 10lb tench. I’m lucky enough to have one of the best tench waters in the country only half an hours drive away and come spring I try to take full advantage of its close proximity. Fishing works nights when the missus lets me maximises my chances but I just cant seem to bag the ten pound plus fish.
This year I decided to concentrate on another lake on the complex that still holds some big tench but not the calibre of fish found on one particular lake that I usually fish. The main reason for this was down to the pressure that this lake sees particularly in spring and I just don’t like competing for swims with other anglers. I had planned a few overnight sessions and one long week stay in hope of bagging a few and then I would move onto the main lake in search of that monster.
To cut a long story short my work night sessions didn’t produce a fish and I managed only two fish from the long session that I cut short due to the fish spawning early. One went nearly 8lb and was a good fish but the fishing was slow and they didn’t get their heads down. Unfortunately for me because of the mild weather over the winter the fish spawned early and I missed the boat. I didn’t even get a chance to fish the main lake for the tench and got reports saying they had spawned that weekend also. 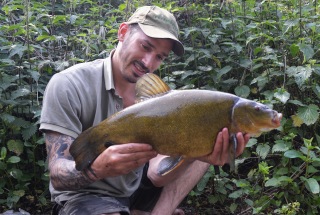 I wont be making that mistake again  next year but I did catch some lovely fish and love my fishing on this particular complex so all was not bad. Roll on next year