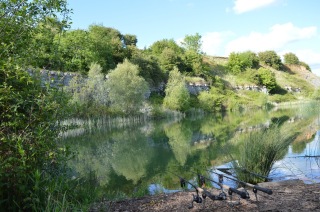 At last Summer is here and after two months I can finally put my University work behind me and concentrate on my fishing. April and May is the time to target specimen tench which incidentally are one of my favourite of the fish species. Not only are they great looking fish they can be quite a challenge to catch particularly later on in the year when they become more wary of anglers baits. Unfortunately for me my lakes have a closed season so when I do finally get out on the lake the tench are usually spawning, not interested in feeding and at a low weight. This calls for an executive decision each year that ends up with me trawling the internet for days trying to find that one magical venue. The first venue I thought of was the famous Linear Fisheries in Oxford but I dismissed fishing here because I didn’t want to be crammed next to other anglers, limited to swims and at £27 for twenty four hours it would be also be expensive. I do like and fish at Linear for the tench most years but I just fancied a change of venue that would give me some solitude. I considered Nazeing Meads in Hertfordshire but the tickets run from June so I would only get two weeks fishing for a season permit. Finally I came across Bishopsbowl Fishery in Warwickshire just passed Oxford and a comfortable two hour drive from my home in Kent.

Bishopsbowl Fishery has a number of lakes on the complex but one stood out to me in particular. Greenhill lake is the largest of the eight lakes present at Bishops Bowl Fishery and at 26 acres it is a manageable size to fish comfortably. The lake has produced tench to over 9lb but is yet to do a double however it was the scenery that caught my eye and the unkown aspect of larger fish being present. The fishery is a flooded stone quarry and is shaped like a dumbbell with a channel that connects two reasonable 9 acres lakes. There are bays, lily pads, reed beds, weed beds, a variation of depths, bars, channels and crystal clear blue water that allows visibility over 10ft with Polaroid’s. It is a truly stunning lake that is lined by the stone cliffs layered in various colours surrounded by lush green trees. It almost feels as if your in another country when the suns shining. The complex is owned by a nice bloke called Shaun who I must say has done a magnificent job with the place and ensured that Greenhill lake has kept its natural qualities. The complex also has a well equipped tackle shop that has a large variety of bait including maggots, a cafe that can provide you with a full cooked breakfast and they are in the process of building shower units for the long haul carpers. With such a great venue, scenery, fin perfect tench to over 9lb, carp to just over 30lb and sighting of bigger fish (tench and carp) I was on my way up the M40 for a 72 hour session on Greenhill Lake.

Now on to tactics which in my book is the second most important aspect of fishing behind location. I decided to stick with what I knew and what I was comfortable with which are simple fluorocarbon hook links fished in conjunction with a cage feeder. The rig is constructed from 8lb Drennan Supplex fluorocarbon 4″ hook link connected to the size 10 ESP Drennan Raptor hook via a standard knotless knot creating a scaled down hair rig. This is pinched in place between two Drennan float stops and fished down the line so the hook bait is 1″ from a mini 15gram Drennan cage feeder. I fished 8lb Drennan Supplex mono straight though to the feeder. I have had lots of success on a variety of waters from fishing this simple but effective rig.

Bait is another important factor that will always contribute to a successful session if you are on the fish. Again I decided to stick with what I was comfortable with and what I knew had worked for other anglers on this particular lake prior to my visit. I cannot stress how important it is to consider all the variables that may affect your baiting approach to fishing a water. You must consider the time of year, the weather, research and find out baits that have been effective on your target water, research what baits are rarely used on your target water, consider the species you are after, know what baits cannot be used on a water, water clarity, weed growth and your fishing distance. It could be as simple as changing you baits to naturals following the identification of an on going fly hatch. 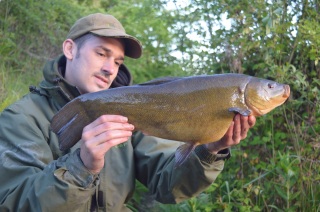 After consideration of all of the above I went with sweetcorn as my primary bait but also decided to take some maggots and lob worms. My groundbait mix in my feeder consisted of Sonubaits crushed pellet, Sensus 3000 super black, Bait Tec Pro Natural and brown crumb. To this I introduced some sweetcorn (including the juice which is a great binder / attractant), hempseed and some Dynamite Baits XL Tutti Fruity flavour enhancer. The baiting tactics were also simplistic and I opted to fish the feeders with a few walnut size balls of ground bait baited around the area of my hook bait. When fishing for tench and bream I like to keep a dark ground bait mix and even introduce compost in certain circumstances. I feel the creating a bed of light groundbait can make the fish wary of moving over it.

The most important factor to consider when fishing is location because as they say you cant catch them if they are not there. Obviously fish can swim and so location is a constant variable that keeps changing which is reliant on many environmental factors. The best option on a new water is to do some research into the lake and ask the bailiffs because their knowledge will always exceed yours. This is what I did and on arrival to Bishopsbowl I had a chat with the bailiff and was recommended a superb swim that regularly produces tench. I was down for a few nights and so had time to find the fish if the swim didn’t produce and move to a different section of the lake.

I arrived at my swim as was speechless. I have fished so many different waters and not one has come close to the surroundings and views this swim provided. It was like I had my own lake and was far away from any other anglers which is exactly what I wanted out of fishing Bishopsbowl. I began my fishing straightaway and started catching some cracking fin perfect roach to a 1lb but blanked on the tench front until day two of my trip. I had been watching the water carefully and spotted some tench moving along the marginal reed bed and had also seen some cruising carp that were scraper 20s. I positioned a rod a few feet from the bank and baited up hoping to pick one off but they didn’t get their heads down and swam mid water above the bait all day. I opted for a change of tactics and decided to fish all rods really tight to the reed beds lining the far margins making the assumption that they would feed more confidently in that area. This decision paid of and I started to catch a few fish. 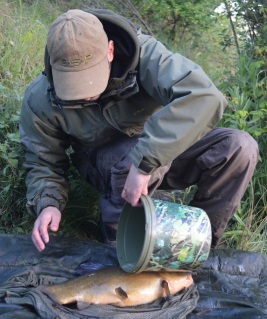 Day two produced a fin perfect female tench of 5lb 7oz and it looked like I might have found the fish. I also managed to catch some more roach up to 1lb 10oz that were also in great condition and that had probably never seen a hook before. Following my big roach the middle rod whipped round and my Delkim screamed for assistance. On picking up the rod I could tell I had hooked a more substantial fish and after a great fight on light tackle I landed a 16lb 2oz mirror. It was all coming together but I was yet to get amongst the larger tench. It was not until the next morning that it really picked up and I am sure the change in weather helped considerably. During the previous two days we had been hit with gales and heavy rain and I knew the fish had pushed into the deeper water and out of the channel for some cover. I was close to moving when I managed to gain access to a weather report that suggested the weather was to turn around with the wind dropping and rain stopping. I made the decision to stay put in hope the fish would start moving through the channel when the predicted weather arrived. It was a gamble but it paid off. 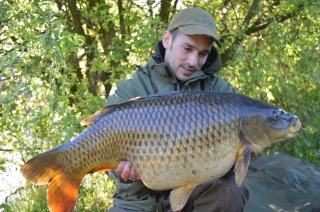 The following morning I was woken up at 4am by a take on my left rod. This resulted in a 5lb 10oz tench. I cast back out and received another take from a 5lb plus fish. This continued until I had racked up four tench to 6lb in a couple of hours. I was due to leave at midday and so this was a great turn of events that effectively made a success of the trip. At around 9.30am my left rod was off and again and it was evident that I had hooked a substantial fish with the culprit obviously a carp. She made numerous runs taking yards of line and put up an epic fight especially on such light tackle. Eventually I landed a superb 20lb 4oz common carp with not a scale out of place. A truly magnificent specimen of a fish that concreted a successful session. It was now time to pack up and just as I was about to pick my rod to reel in the bait runner went into overdrive. Unfortunately I lost the fish but as they say you cant win them all and I was satisfied with the overall results of the session. 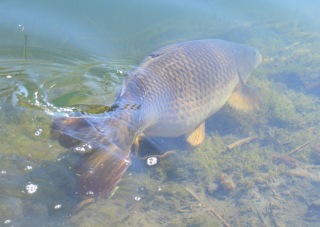 Greenhill Lake is such a fantastic venue that I would recommend it to anyone interested in carp, tench or roach fishing. The scenery is stunning, the staff are friendly, the fish are all in perfect condition, the facilities are excellent and it has been managed following all the correct principles associated with fishing. I am now embarking on a bream campaign that will no doubt end up with many blanks on a 120 acre gravel pit but cannot wait to get back to Bishopsbowl Fishery come September. Tight Lines 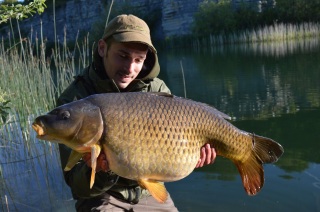