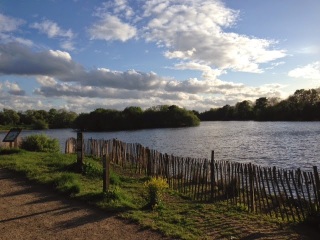 11/05/14 – Last year I spent over fifteen nights on a very low stocked one hundred acre sand pit in an attempt to catch a giant slab into double figures but failed. A double figure bream is a great specimen and when attempting to catch theses creatures by design it can be more tricky then any carp fishermen would believe. Its common for the “carpers” to get annoyed with the bream and this is highly understandable from my perspective as there is nothing worse then strategically placing a bait in a specific area carefully baited for it to be picked up by a 6lb bream when the primary target was a carp. However unlike some I love all species of fish and the bream is no exception. A large double figure slab is an amazing creature and believe me not easy to catch. 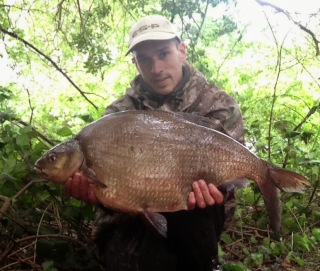 Currently my lakes are in the closed season and so I sat down in front of the computer and spent hours searching for an accessible water that held some giant bream and tench. I came across Barden Lake in Tonbridge and was already familiar with the stock as I was a member at Tonbridge Angling Society many years ago and I had heard stories of Bream to over 10lb so that’s where I decided to go. Barden is approximately sixteen acres and holds specimen sized fish of of many species and being local it seemed the ideal choice.

I had looked up the weather conditions for the trip and a strong westerly wind was predicted to blow in and so with some help from Google Earth I managed to establish a bay on Barden in which this wind was pushing into. On arrival I made my way to the bay right in the teeth of an extremely strong wind and set up. Barden lake is a day ticket water but also a members water that allows night fishing only after you have been a member for a year so I was only able to fish during the hours of daylight. This was to prove difficult because the Bream is generally a nocturnal fish but I felt I could encourage them to get on my particle mix. 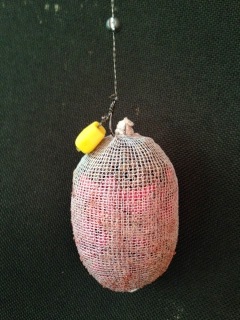 I decided to fish one rod out for the Bream at around forty yards and the other rod flicked down in the margins in hope of a giant tench. Both rigs were similar apart from the hook bait and incorporated 12lb supple Drenham braid tied to a size 10 Raptor hook as a standard hair rig. I used pop up plastic corn on one and a piece of red rig foam on the other rod for the tench but attached a PVA bag full of red maggots and some micro pellets. I used pellets in the bag to overcome the problem of piercing the maggots and splitting the bag when you attach it to your hook. With the pellets being in the top section of the PVA you can attach your hook through this section. I choose to spod a small amount of particle over the bream rod fished long that included molasses, hemp, pellets, maggots, sweetcorn and vitilin.

Once the rods were out I sheltered myself from harsh wind pushing in that was bending the trees like they were made out of rubber. I managed to get to sleep when I was woken up at around 7am by a few bleeps on my rod fished long. This was typical of a bream bite so I hand felt the line that confirmed a fish was on and lifted the rod up connect with a fish. I could tell I had hooked a bream and a good one. A weak fight commenced and I netted a gigantic dustbin lid that easily looked into double figures. I had been trying for years to catch a double figure bream fishing for days on extremely hard low stocked waters and now on a day trip session had one in the bag. The fish went 12lb 9oz on the Rubens and I was elated.

After some great excitement the rods were cast back out and the wait began again. The wind kept pushing into the bay and it became evident that a number of fish had followed this wind and were present in this area of the lake. I must have seen fifteen carp launch themselves from the water and so I decided to change tactics. I brought my bream rod in and fished it in the margins where the fish had been rolling hoping for a carp to take the bait.

At around 2pm my right had rod rattled of and I connected into a decent fish. I was sure that I had hooked a tench but after a great fight that pushed my 1.5 test curve rods to the limit a small mirror carp emerged. I am sure the fish was from the river and got into Barden from the heavy flooding that occurred this winter. It had numerous sores and was streamline with a huge tail that contributed to the great fight. I was a bit disappointed that it was not a tench but who couldn’t be happy with a double figure bream and carp from a highly pressured gravel pit on a day ticket. 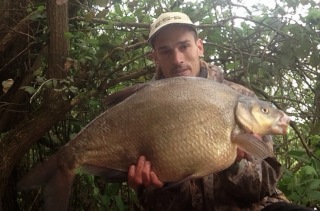 I am planning to get myself back down to the lake within the next couple of weeks and see if I can bag a bigger one and up my PB again. The limitations, specifically not being allowed to night fishing make the fishing more difficult but I am up for the challenge and am sure that if I can bait a spot consistently and fish it for consecutive days I can get the bream feeding in my area. I will keep you posted, Tight Lines.