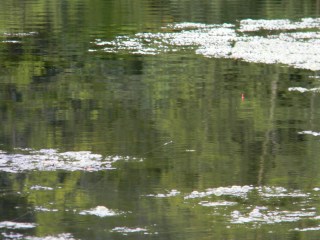 As you may be aware I have spent many days at Keston Ponds after the elusive carp in the bottom lake. Last season I received my prize for all the time and effort put in. Top Pond Common at 20lb. Whilst fishing the bottom lake my friend Neil recommended fishing the top pond for tench so I thought this season I would give it a go.

The top pond at Keston is smaller than the bottom pond but contains just as much weed which makes presentation a little difficult. The lake holds a few carp to around 18lb and this includes some spectacular coloured Koi most probably unwanted pets. The usual problems of dog walkers, weed and hard fishing will have to be overcome if I want a Keston tinca.

31/08/11 – I decided to complete my first session, a quick one after work on a overcast mild day. One rod was rigged with a simple free running ledger with a long hook link straight through to a size 8 (specialist barbed)  and the other, my main rod, on a more traditional waggler float set up straight through to smaller size 12 (specialist barbed) hook . Both on 1 1/2lb test curve soft tip barbel rods with 8lb line. On the float set up  I positioned most of the shot four inches from the hook in order for the bait to get to the bottom through the blanket weed leaving only a small tip of the waggler showing to catch the most sensitive of bites.

On arrival there were many people fishing including the spot I had my eye on but they soon vanished and I moved in. Prawns were chosen bait for the hook with 6mm trout pellets and some ground bait scattered in the area.  I tried to place the hook baits in gaps in the weed but still felt my presentation was being compromised. These tactics were recommended to me by a good fisherman and so I will persevere with them for now. The evening passed quickly and I had no fish. Just one uplift bite was all I had to show for the session. On my next session I may rake the swim prior to fishing to clear some weed allowing the hook bait presentation to be spot on and stir the bottom up.I will keep you updated until I get my prize.

03/09/11 -I woke up at 4.30am to tackle the top pond tench for a second session. My aim was to rake the swim and float fish prawns through the gaps in the weed. I made a swim rake from an old rake head and some old BT cable which I hoped would stir up the bottom and clear some weed to allow better bait presentation. On arrival I noticed there were two people fishing and so opted not to use the rake. I cast out and scattered some prawns around the area. Within half an hour the float positively vanished and I hooked into a fish. The tench powered into the weed and the hooked pulled. I was gutted but wasted no time in getting the rod baited and back out. During the rest of the morning I lost another fish and missed a good bite. A fisherman in the swim next to me landed a carp called Goldie at 10lb and had another 14lb common. Both fish came to floater fished dog biscuits. Goldie had lovely markings and is  koi carp put in the lake years ago.  As the morning passed I opted to have a go on the bottom pond. The tench in top pond stop feeding during the day and I thought I would have a go at the carp but had no such luck. I will be back down the ponds next week to bag myself a Keston red eye.

11/09/11 – Fished the evening in the same swim but changed tactics. I fished two rods with method feeder in conjunction with short hook links. I had a good social with a regular called Chris but had no fish to show for my efforts. I will be back and will no doubt rake my swim prior to fishing.

**/09/11 – I planned to do the whole day tench fishing starting early but woke up to heavy rain and wind. so opted to go back to bed. I eventually got down to the lake at 11am and was surprised not to see a fisherman in sight. As the lake was free of anglers I got the rake out and cleaned my chosen swim. For an hour I raked the weed away until I felt the shudder of gravel. Feeling confident I cast out two feeders with bolt rigs fished in conjunction with prawns. Black ground bait mixed with 6mm pellet, hemp, sweetcorn and some maggots was spread over the raked area. The day passed quick and before long I was due home with not even a single bite. I did however have a go for a carp called Goldie of the top but managed to catch two ducks. I had to actually reel the duck in, net it and then my mate Chris unhooking the beak. I tried to keep them of the bait but sometimes they are so quick its not possible. I will catch a tench from this lake and am now more determined then ever. I’m positive prime time is early mornings and so this weekend I will be up early whatever the weather. My mate Karl also joined me but had nothing to show for his efforts.
I had a chat with a man named Dave who had caught two carp on one of my previous sessions. It turned out the next day he landed a carp called rusty and a 17lb mirror (nice fishing). Maybe I will have a proper go at the top pond carp?? In conclusion it was a nice session with a good social but no fish.