Trevella camp site is located in Newquay Cornwall. I have visited this site many times and fished the two lakes that are free with the camping. Lake 1 (Trevella Lake) is three acres and the lake record stands at 27lb. Although this lake does not contain the large specimens I am usually after it is a great place to fish with beautiful scenery. I was looking to fish the lake for eels as from past experience it contains a few decent size fish. The smaller of the two lakes is named Springfield lake and contains a large number of carp and some large sized roach. The carp in Springfield lake are easy to catch in comparison to the Trevella lake and many are in poor condition from being caught regularly. This was the reason I decided to fish Trevella lake as I like a challenge and a fish caught here would be a far greater achievement. I was about to find out that the carp in Trevella Lake were also fine specimens and resembled the old wild carp that have seemed to disappear in English waters.

We arrived at the site yesterday (Sat 21st May) and I had a look around the two lakes. Trevella lake was full of Canadian pond weed but I could see the fish feeding of the top probably picking of the water snail and lava. From then I knew the tactic would be to drop a bait on the carps head using bread or dog biscuit. The weed was so thick you could just about see it move when a fish was feeding but the give away was the loud slurping noises that the carp made. 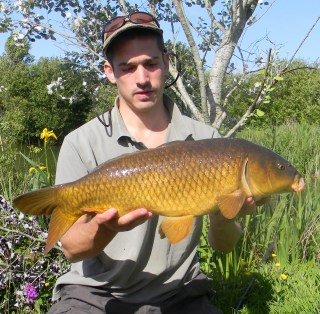 Sunday 22nd May – I set about catching a carp from Trevella lake and tackled up with 12lb line straight through and just a Korda wide gape size 8 tied on the end with a Palomar knot. I opted against a controller float and decide to try and find a carp at close quarters and free line a large bread flake where the weed moving from the feeding carp. Within five minutes I found a carp in the thick Canadian pond weed and I flicked the bread right on the carps head. The weed was thick that you could not see the carp but just hear the slurping and see the weed move. After five minutes the fish noticed my bait and I watched in amazement as it struggled to suck it in its mouth. It literally climbed through the weed with its head out the water and took the bread. The water exploded and I was in to a reasonable fish. She put up a great fight considering she had buried herself in the weed and so with a bit of improvising I managed to drag the weed and fish into the waiting net. When weighed she went 11lb and was in great condition. The carp was a long common, looked like a wild carp and was a great start to the holiday.

After walking around the lake three times I managed to find another carp feeding in the weed. Within five minutes a lovely 7lb common was in the net. I had two carp to my name from Trevella which was not bad considering I had only been fishing the lake for less than an hour. The bailiff arrived that evening and explained it was not worth fishing for the carp as they were extremely hard to catch!! I told him what I had caught and he looked blank faced. I think that generally the people fishing were fishing on the bottom etc and not looking for the fish and getting an idea how they were feeding.
Monday 23rd May – I fished Trevella lake again and lost a large carp hooked of the top in the weed. I could not locate any more carp that evening and so called it a day after a couple hours fishing. The weather was wet and cold and I think the fish had moved into the deeper water where there is no weed.

Tuesday 24th May – I managed to catch another two carp off the top from Trevella lake. The first fish was an immaculate 10lb common and the other a beautifully marked mirror of around 9lb. The fi

sh are not large but there not pasties and a pleasure to catch. The mirror was caught in such thick weed that I literally dragged a ball of weed the size of a small car towards me. My other half did the honours and managed to net all the weed and the mirror that at that time we didn’t know was still on the end of the line.

I managed another small common but one that looked like it was transferred from the top lake as it was more pale in colour from the others. My dad was yet to catch a carp from the lake and so we both scouted for a fish picking at the weed. Eventually we came accross a carp within free lining distance. As the bread lay above its head it pushed throung the weed and dad was in. It put up a great fight and weighed in at 13lb the biggest of the holiday. My dad was happy and so we ended the day on a good note. Back to the caravan we went for some scrumpy jack. During our stay I also fished the bottom lake and managed a common of around 6lb pictures below. This was caught from tight against the central island on a boilie fished in cojunction with a method feeded.